The Sister Witches of Story Cove COMPLETE Set for You!

Have you read the Sister Witches of Story Cove yet? Are you looking for a new paranormal cozy series to read this month? 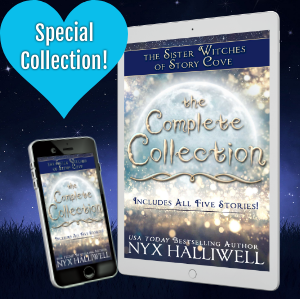 Fall in love with small-town magick – fairytale style! Welcome to Story Cove, where four fairytale sisters and their family run the Enchanted Candle & Soap Company, and find themselves up to their magickal cauldrons in murder, mystery, and romance!

This Complete Special Edition contains ALL five stories—CINDER, BELLE, SNOW, RUBY, and ZELLE!  Grab a cup of your favorite beverage and cuddle with your pet while you binge these sweet magickal stories.

Join the sisters as they solve paranormal mysteries that fans of Cinderella, Beauty & the Beast, Snow White, Little Red Riding Hood, and Rapunzel will love.

Books in this set include:

A bad apple is about to ruin Halloween and my fairytale ending depends on the luck of a black cat.

The trouble with my orchard started shortly after hiring a new farmhand to help with the bustling fall season. He showed up with secrets – and a kitten he claims isn’t his. The black cat thinks otherwise and his intentions seem pure, but there’s a rotten apple somewhere and evidence is adding up against both of them.

While my heart has fallen for them, if I can’t root out the magick poisoning my apples, everyone in my hometown will pay the price by falling into an endless enchanted sleep. I’ll need a dose of good luck, and the help of my Sherwood family, to uncover the truth and stop the evil spell.

**Note: this story is clean and shareable with younger readers 13 and up!

Happy October 1st! Wheeee! It's my favorite time of year – apples, cider, bonfires, and Halloween. I want to celebrate by giving you an excerpt from Snow, Sister Witches of Story Cove, releasing Tuesday.

This story takes place at Halloween, so it's perfect to read this month!

A bad apple is about to ruin Halloween, and my fairytale ending depends on the luck of a homeless black kitten.

Runa alerts three seconds before the stranger knocks, coming to her feet, her white ruff snapping to attention and her lip curling in a low growl. The tiny hairs on the back of my neck mimic hers, rising as though electricity is charging them.

“Down, girl,” I tell the wolf-hybrid.

I suspect it’s Esmerelda from the reaction, but Korbin perched in my open window this morning and let loose a hair raising “caw” before lifting into the lavender shade of dawn.

The raven is an omen-hunter, a messenger. Since that rude awakening, I've been waiting for the sign his appearance denotes. Upon opening the door, my morning tea still in hand, I understand his warning. Thankfully, it’s not Esmerelda.

Relief wars with curiosity as I regard the dark-haired stranger on my front stoop. With eyes the color of oak moss, he nods and offers a slightly stunned—if not awed—look. “Er…morning.”

I get that a lot, thanks to my thick, black hair, violet eyes, and pale complexion. Esme used to enroll me in local beauty pageants when I was a girl, and I hated every moment of them. The ribbons I won went up in flames the day my father died and my stepmother became my enemy in more ways than one.

My cousin, Belle, has been working her magick to set me up with men on Fairytale Love, a dating site she claims has made over a million successful matches. I assume this is one of the latest to see my profile. Bold of him to show up in person. “Sorry, not interested.”

“Apologies, then.” His voice is laced with a brogue. Scottish? “Heard you might be in need of an ornamaner. Handyman. Must’ve heard wrong, eh?”

Yep, a Scot, and a handsome one at that. “Wait,” I say as he turns. “Are you applying for the farmhand position?”

The Story Cove Pumpkin Festival is this weekend—hayrack rides, corn mazes, a rubber ducky derby, face painting, pony rides, all kinds of handmade crafts, and, of course, food. The festival is known far and wide for the all-town event, and a big draw is my orchard, A Bushel and a Peck. My regular farmhand and jack-of-all-trades, George, is out with a bad back and I’m up to my ears in jobs that need doing.

The Scot gives a curt nod. “Been on the road a while, but was passin’ through and stopped at the diner. Saw your flyer, asked around. Folks said you’re good people.”

“Did they now? This time of year, I’m quite popular. Other times, some believe I’m working spells and holding rituals. They’re correct, but I don’t tell them that.”

Could be he thinks I jest, but his intelligent eyes tell me otherwise. “Could use a place to stay and I'm good with animals.” His gaze goes to Runa.

The dog wags her tail. She, too, is taken in by an handsome face.

Her partner—Ferrin, the wolf who haunts my woods—wouldn't care for it, I bet.

“The Pumpkin Festival is in two days, and plenty of tourists are already here. The event keeps the farm in the black for the next year, so it’s all-hands on deck. The work is hard, days long.”

His tanned skin and callused hands speak to that. A black kitten peeks around his booted ankle.

Motioning for him to come closer, I lean down as if to whisper in his ear. His breath catches and my nose captures the scent of forest pine and soap. I pause for half a second, meeting his eyes, dissolving in them. He holds my gaze, doesn’t glance at the slender scar under my left eye that mars my acclaimed beauty. I smile, and as he returns it, I yank out a few strands of his hair.

He yelps, jerks back. “What’s that about, now?”

I make no pretense about being a witch around town, but if he’s only passing through, he may not know it. “Need to check if your intentions are true.”

Inside, I drop the strands into my cauldron, watching the smoke as it rises. The misty vapor turns green like his eyes.

But there are three flecks of silver threaded in the green. I watch as they spin and dance, representing three secrets our handsome Scotsman is hiding.

Ready to read the rest? Preorder now and be the first to get it on your ereader when it releases Tuesday!

I'm so happy to bring these fun, witchy fairytales to all retailers. The books in the Sisters Witches of Story Cove will release once a month from now through December!

Can Cinder use a pair of cursed glass slippers to win over her Prince Charming and solve a murder?

Even in the witchy world of the Sherwood sisters, I have a rare magickal talent—I can literally step into someone's shoes and know things about them. Things I don’t want to know.

As head of the family business, The Enchanted Candle & Soap Company, it’s my job to keep us in the black. My sisters are depending on me, and we need a massive cash inflow if we’re going to stay afloat and expand into a new line of bath and body products.

When an aging actress swirls into town in desperate need of my velvety foot cream, this is my chance to get much needed publicity for our shop. I’ll even put up with Finn, the actress's all-too-handsome son, who continuously invites me to a — get this — ball! Fancy clothes and socializing? Please. I’d rather turn him into a toad.

Okay, not really. He’s far too cute for that.

When a woman ends up dead while wearing the actress’s very famous and very cursed pair of glass slippers, I discover my power is more important than ever. Everyone is a suspect, and the police are relying on me to help them investigate. Will stepping into the cursed shoes put me on the trail of a killer, or will I end up as the next victim?

**Previously published as If the Cursed Shoe Fits

Once upon a time in a small town called Story Cove…

Four magickal sisters, plus their family, find themselves in very real, living versions of their favorite fairytales.

These stories come with princes, poison apples, and shape-shifting wolves, but also murder, mystery, and—let’s not forget—magick. Enchantment abounds as they fight evil, break curses, and navigate the modern dating world, all while searching for their personal happy endings.